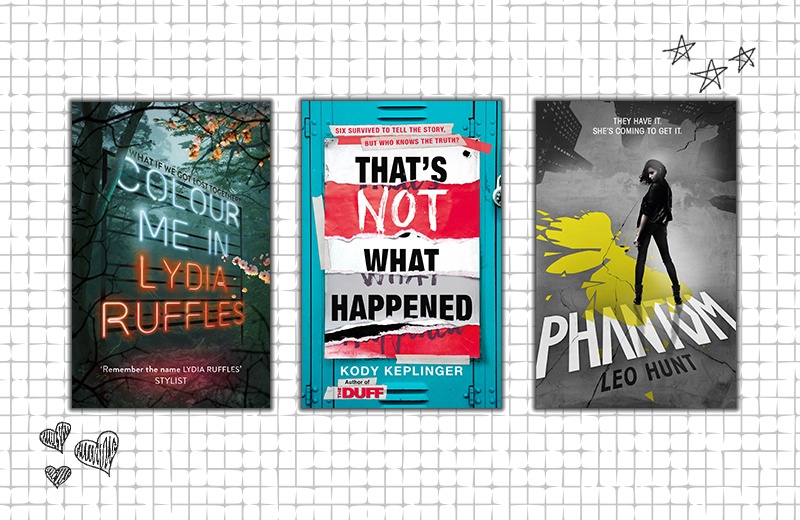 How brilliant is this summer?! It’s the perfect weather for sitting outside and reading! And there’s still so much of it left (hopefully), so we thought we’d give you some more great reads to keep you busy…

From the author of The Taste of Blue Light – we are SUPER excited about this one.

Nineteen-year-old actor Arlo likes nothing more than howling across the city skyline with his best friend Luke from the roof of their apartment. Up there, away from the world, they are working on a secret project which keeps the familiar black weeds from crawling inside him.

But when something irreparable happens and Arlo feels himself drowning with no way back to the surface, he flees to the other side of the world, taking only a sketchbook full of maps and the hope that he can outrun grief.

With its steaming soup and neon lights, this new place is both comforting and isolating. Here, Arlo meets fellow traveller Mizuki. Something about her feels more like home than he’s felt in a while. But what is Mizuki searching for, and will their shattered hearts bring them together or tear them apart?

This is The Catcher in the Rye meets Turtles All The Way Down.

It’s five years since the destruction of the rehabilitation camps that imprisoned Zu and her friends … but the battle is far from over.

Seventeen-year-old Suzume ‘Zu’ Kimura has assumed the role of spokesperson for the interim government, fighting for the rights of the kids once persecuted for their powers. But though they are no longer imprisoned, the Psi still face huge prejudice, and a growing tide of misinformation.

When Zu is accused of committing a horrifying act, she is forced to go on the run in order to stay alive. Determined to clear her name, Zu travels in search of safety and answers, but soon uncovers a dark truth that threatens the future of all Psi. With enemies everywhere, who can she trust to help her fight back and save the friends who were once her protectors?

How EPIC does this sound?!

Shay has followed Xander and joined his mysterious scientific cult at their remote Scottish compound. She’s desperately searching for Callie, who went missing before the start of the epidemic which has killed 95% of cases, and left a tiny number of survivors with astonishing new powers.

Can Shay uncover the truth about the origins of the epidemic, find Callie and perhaps even rekindle her relationship with Kai? Or will Xander’s grand plans destroy them all for ever?

Music? Check. Boy bands? Check. First love? Check. Heartbreak? Check. The Songs About A Girl series has EVERYTHING you want in a fun, easy-going read and Songs About A Boy is the FINAL instalment.

Just as Charlie allows herself to succumb to Gabe’s charms, an explosive revelation about her mother’s death threatens to pull them apart. Meanwhile, a media circus has exploded around the future of Fire&Lights, and when the band announces a US tour to show the world that they are stronger than ever, Charlie gets the opportunity to accompany them. New York City, here she comes!

But it’s not all fun and games. Charlie is still feeling all kinds of awkward around Gabe and knowing that her mother’s last days were in America touring with her own band, Charlie uses the opportunity to uncover some more truths about her mother’s death.

As Fire&Lights try to win over the world again, and as Charlie and Gabriel uncover the true story that links their pasts, will Charlie finally be able to follow her heart?

Tech in her veins. Anarchy in her blood. If you love Blade Runner and Black Mirror then you will LOVE this.

In the City, they have it all – sunlight, a corp job, a corpbloc home miles above the poisoned earth below. Four-hundred storeys down, in the darkness of the undercity slums, lives sixteen-year-old orphan Nova.

Nova is a hacker. Aided by the program Phantom, she can sneak up to the City, leech what she needs and sink back down again, invisible as a ghost. But Nova has caught someone’s eye; Phantom-creator and legendary anti-corp hacker, the Moth.

Now the Moth has a job for Nova. A job that will send her miles into the sky. To bring the City crashing down.

That’s Not What Happened by Kody Keplinger (28th August 2018)

Six survived to tell the story, but who knows the truth? The next hotly anticipated YA novel from bestselling author of The Duff.

It’s been three years since the Virgil County High School Massacre. Three years since my best friend, Sarah, was killed in a bathroom stall during the mass shooting. Everyone knows Sarah’s story – that she died proclaiming her faith.

But it’s not true.

I know because I was with her when she died. I didn’t say anything then, and people got hurt because of it. Now Sarah’s parents are publishing a book about her, so this might be my last chance to set the record straight . . . but I’m not the only survivor with a story to tell about what did – and didn’t – happen that day.

Except Sarah’s martyrdom is important to a lot of people, people who don’t take kindly to what I’m trying to do. And the more I learn, the less certain I am about what’s right. I don’t know what will be worse: the guilt of staying silent or the consequences of speaking up . . .