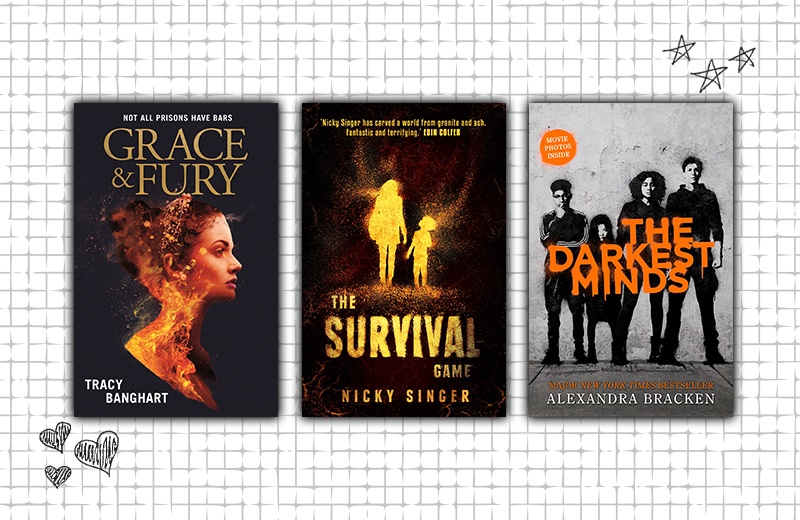 It’s July. YALC month HOORAY and we have lots of great titles coming…

The Survival Game is the story of Mhairi who travels from the Sudan to Scotland to escape the increasing heat of the world. It’s such a beautiful book – we cannot emphasise that enough.

It’s a timely, extraordinary story about border control and refugees, about survival and what it costs, about the power of small kindnesses that change everything. Also Eoin Colfer has called it ‘fantastic and terrifying’ so what more do you need to know?

Look out for more and more info on BKMRK for this one!

Bold, brutal and brilliant feminist fantasy – if you were a fan of Red Queen or The Selection then you will LOVE this.

In the world of Grace & Fury, women have no rights. Sisters Serina and Nomi face two very different fates: one in the palace, the other on an island prison where women must fight to survive.

Serina has spent her whole life preparing to become a Grace – selected to stand by the heir to the throne as a shining example of the perfect woman.

But her headstrong and rebellious younger sister has a dangerous secret, and one wrong move could cost both sisters everything.

Can Serina fight? And will Nomi win?

WE JUST WANT YOU GUYS TO READ IT NOW.

Have you seen the trailer for The Darkest Minds film yet? Because it looks EPIC. Starring The Hunger Games’ Amandla Stenberg and Game of Thrones’ Gwendoline Christie and from the producers of Stranger Things and Arrival – we cannot WAIT.

To celebrate the release of the film, we are publishing a film edition of the first book in this heart-stopping series by New York Times bestseller Alexandra Bracken.

For those of you who haven’t read it yet, we IMPLORE you to. It is brilliant.

Ruby is sixteen. She is dangerous. And she is alive. For now.

A mysterious disease has killed most of America’s children. Ruby might have survived, but she and the others have emerged with something far worse than a virus: frightening abilities they cannot control. Pressured by the government, Ruby’s parents sent her to Thurmond, a brutal state ‘rehabilitation camp’, where she has learned to fear and suppress her new power. But what if mastering it is a whole generation’s only chance for survival?

How great does this sound?! Don’t you just want to read the WHOLE series right now?!

Strange rituals, hauntings and the occult collide in this darkly memorable YA thriller. If you love books by Louise O’Neill, Sarah Waters and Donna Tartt, then be prepared to delve into this.

One year ago, Kitty’s boyfriend Nikki Bramley visited a psychic who told him he had no future. Now, he’s dead. With the Bramleys grieving inside their rural English home, Kitty sets out to find the psychic who read Nikki his fate.

Instead she finds Roan, an enigmatic medium claiming he can speak to the dead. He belongs to the Life and Death Parade – a group that explore the thin veil between this world and the next.

Kitty is convinced he’s a charlatan – but the ‘magic’ seems to work. The darkness is lifting.

But there are things Kitty can’t ignore – evidence of strange rituals, shadows of the boy she lost, and Kitty begins to suspect that this boy had something to do with Nikki’s death. More, that he may have the very real power to bring him back …

Prepare to fall in love this summer and join Precious and Harry on their road trip to the end of the world and back … Your summer crush starts here!