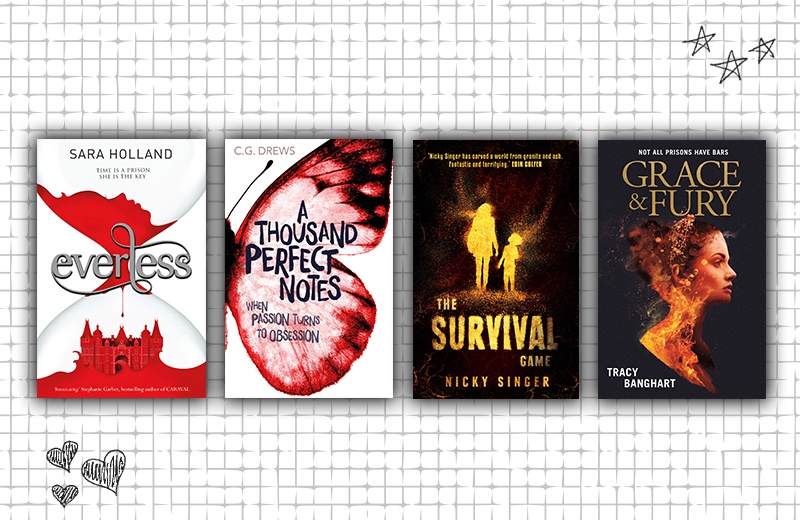 Because of that, we thought it was only fair to give you a look ahead at some of our brilliant summer reads…

The brand new Summoner novel from Taran Matharu is a prequel to Summoner: The Novice (chosen as a World Book Day title of 2018) and it is mind-blowing. The Outcast tells the story of orphaned stable boy Arcturus, the first non-noble summoner to be allowed access to Vocans Acadamy.

Summoner fans: be prepared for more action and characters you love.

New readers: this is your perfect introduction to the series!

And we are definitely celebrating. Cat Clarke, author of Girlhood – a 2017 Zoella Book Club pick – is back with a riveting, heartbreaking, trailblazing new novel.

It starts with a wedding. And a car crash.

David Almond, author of Skellig and A Song for Ella Grey is back with an outstanding novel full of warmth, light and hope.

David Almond says: ‘I guess it embodies my constant astonishment at being alive in this beautiful, weird, extraordinary world.’

And we can totally relate because the world really is beautiful (especially when it involves books).

Ventura Saga: The Truth of Different Skies by Kate Ling (3rd May 2018)

What makes you abandon your world? How do you say goodbye when it’s forever?

A heart-breaking story about survival, love and hope and the prequel to The Loneliness of Distant Beings and The Glow of Fallen Stars.

One teenager in a skirt.
One teenager with a lighter.
One moment that changes both their lives forever.

This is a story of recovery, reconciliation, forgiveness and, above all, hope. It’s about the power of being true to yourself, bravery and the good and bad in all of us.

And, remarkably, it’s all true.

A Sunday Times and New York Times bestseller, perfect for fans of the Red Queen trilogy – now in paperback.

In the land of Sempera, the rich control everything – even time. Ever since the age of alchemy and sorcery, hours, days and years have been extracted from blood and bound to iron coins. The rich live for centuries; the poor bleed themselves dry.

‘An intoxicating blend of blood, secrets, and haunting mythology, Everless gives new and terrifying meaning to the phrase running out of time.’ Stephanie Garber, author of Caraval

An emotionally charged story about the power of dreams, and how passion can turn to obsession.

We’ve already had SUCH  a great response to this book on BKMRK (that cover though)! This is an explosive debut for YA readers which tackles the dark topic of domestic abuse in an ultimately hopeful tale.

A pacey, thriller like nothing you’ve read before. Told in real time, this a book you do not want to miss.

Taran and her twin Hari never wanted to move to Firestone House. When they start noticing boarded-up flats and glossy fliers for expensive apartments, they don’t think much of it – until Hari is caught up in a tragedy, and they are forced to go on the run. It’s up to the teenagers to uncover the sinister truth behind what’s going on in the block, before it blows their world apart.

One boy stranded at sea.

One girl back on land.

One ocean between them.

The only thing willing him to survive is the thought of her.

A romance with bite, perfect for fans of Jandy Nelson and Nicola Yoon.

Ready for the perfect summer read (about girls who kiss the boys and make them cry)?

An addictive romance with a fantasy twist for fans of Holly Smale, Ally Carter and Zoe Sugg. Prepare to fall under the spell of Wattpad star Rebecca Sky, in this compulsive romance.

The most beautiful cities Europe has to offer. And messy, complicated, can-this-really-be-happening love story – or two…

The perfect summer read for fans of Jennifer E Smith and Sara Barnard.

The Survival Game is the story of Mhairi who travels from the Sudan to Scotland to escape the increasing heat of the world. It’s such a beautiful book – we cannot emphasise that enough – and we’re also publishing TWO (that’s right TWO) editions of this book in black and white.

It’s a timely, extraordinary story about border control and refugees, about survival and what it costs, about the power of small kindnesses that change everything. Also Eoin Colfer has called it ‘fantastic and terrifying’ so what more do you need to know?

Look out for more and more info on BKMRK for this one!

Bold, brutal and brilliant feminist fantasy – if you were a fan of Red Queen or The Selection then you will LOVE this.

In the world of Grace & Fury, women have no rights. Sisters Serina and Nomi face two very different fates: one in the palace, the other on an island prison where women must fight to survive.

Serina has spent her whole life preparing to become a Grace – selected to stand by the heir to the throne as a shining example of the perfect woman.

But her headstrong and rebellious younger sister has a dangerous secret, and one wrong move could cost both sisters everything.

Can Serina fight? And will Nomi win?

WE JUST WANT YOU GUYS TO READ IT NOW.

Have you seen the trailer for The Darkest Minds film yet? Because it looks EPIC. Starring The Hunger Games’ Amandla Stenberg and Game of Thrones’ Gwendoline Christie and from the producers of Stranger Things and Arrival – we cannot WAIT.

To celebrate the release of the film, we are publishing a film edition of the first book in this heart-stopping series by New York Times bestseller Alexandra Bracken.

For those of you who haven’t read it yet, we IMPLORE you to. It is brilliant.

Ruby is sixteen. She is dangerous. And she is alive. For now.

A mysterious disease has killed most of America’s children. Ruby might have survived, but she and the others have emerged with something far worse than a virus: frightening abilities they cannot control. Pressured by the government, Ruby’s parents sent her to Thurmond, a brutal state ‘rehabilitation camp’, where she has learned to fear and suppress her new power. But what if mastering it is a whole generation’s only chance for survival?

How great does this sound?! Don’t you just want to read the WHOLE series right now?!

Strange rituals, hauntings and the occult collide in this darkly memorable YA thriller. If you love books by Louise O’Neill, Sarah Waters and Donna Tartt, then be prepared to delve into this.

One year ago, Kitty’s boyfriend Nikki Bramley visited a psychic who told him he had no future. Now, he’s dead. With the Bramleys grieving inside their rural English home, Kitty sets out to find the psychic who read Nikki his fate.

Instead she finds Roan, an enigmatic medium claiming he can speak to the dead. He belongs to the Life and Death Parade – a group that explore the thin veil between this world and the next.

Kitty is convinced he’s a charlatan – but the ‘magic’ seems to work. The darkness is lifting.

But there are things Kitty can’t ignore – evidence of strange rituals, shadows of the boy she lost, and Kitty begins to suspect that this boy had something to do with Nikki’s death. More, that he may have the very real power to bring him back …

Prepare to fall in love this summer and join Precious and Harry on their road trip to the end of the world and back … Your summer crush starts here!

Look out for the cover reveal of Girl At Sea on Wednesday 16th May! It’s so good and summery it’ll make you just want to jet off on a plane right now!